14 Night Cruise sailing from Tokyo to Hong Kong onboard Boudicca.

Embark on an enlightening and enriching adventure around the beautiful, intoxicating islands of Japan and experience this country’s fascinating way of life, with chances to explore the history and spirituality of enchanting temples, shrines and palaces; sample traditional flavours; fully-immerse yourself in unique culture; and much more.

From the moment you arrive in Tokyo to meet Boudicca, your unforgettable 14-night cruise is full to the brim with authentic Japanese sights and experiences. With time in the capital before setting sail, perhaps revel in the city’s mix of ultramodern and traditional among its palaces, temples and neon-lit landmarks; and be captivated by charming Geisha’s as the perform dances to traditional music. Alternatively, you could opt for a tour to Kamakura to connect with origins of the Samurai. Attraction-packed Nagoya – a maiden call for Fred. Olsen – awaits you next. Your smaller ship docks close to the centre here, bringing highlights such as Nagoya Castle, Atsuta – one of Shinto’s most important shrines, Ose Kannon Temple and much more within easy reach. Continuing onwards to Kobe, where Boudicca will dock overnight, there’s a chance to tour to the historic city of Osaka and don a traditional Kimono as part of a classical Japanese tea ceremony; or head to Kyoto – Japan’s former imperial capital – to uncover stunning Buddhist temples, imperial palaces and Shinto shrines, and encounter famous Geishas once again.

Hiroshima and Nagasaki are sure to invoke thoughts of the devastation caused by the United States’ infamous nuclear attacks in World War II: Hiroshima’s iconic Atomic Bomb Dome, the Hiroshima Peace Museum and Nagasaki’s Atomic Bomb Museum are must-visit sites. However, both offer much more than memories of the war. Awe-inspiring temples, pagodas and shrines, including Hiroshima’s UNESCO-listed Itsukushima Shrine, fragrant Oriental gardens, views of picturesque Mount Inasa – overlooking Nagasaki – and quintessentially Japanese experiences await you too. In between calls to these remarkable cities, a visit to Beppu – situated on the beautiful island of Kyushu – provides an opportunity to indulge in blissful relaxation in the city’s famous thermal hot springs, mud baths, sand baths and steam baths. For breathtaking photo opportunities, don’t miss the Hells of Beppu, and the views on offer from atop Mount Tsurumi. Throughout your time in Japan, you’ll have countless chances to taste authentic Japanese cuisine such as Sake wine, soba and sushi too. Finally, before heading home, you round off your journey with the capital of Taiwan and Hong Kong’s iconic skyline for a memorable end to your holiday.

Highlights of this cruise:

Tokyo, Japan
Tokyo is a vast and enticing city - the Tokyo Metropolis spans not just the city itself but encompasses rugged mountains to the west and subtropical islands to the south. The city centre - with its huge skyscrapers and dazzling neon lights, is exciting and vibrant, while the temples and gardens dotted around the capital offer a taste of traditional Japan.

Despite its size, much of the region is covered by forest, with an abundance of Japanese cypress. Considered to be one of the main economic capitals of the world, along with London and New York, Tokyo City has a reputation for being a jungle of concrete, wires and neon lights, but it includes an astonshing array of sights such as the temples of Asakusa and the gardens of the Imperial Palace.

Spot the Tokyo Metropolitan Government building (in effect, Tokyo's City Hall), the highest building in Tokyo. Its twin towers have viewing platforms that offer a great view over Tokyo and beyond.

Nagoya, Japan
Originally developed as the Castle Town of the Owari during the Edo Period, Nagoya played a major role in Japanese governance under the rule of great leaders such as Toyotomi Hideyoshi, Oda Nobunaga and Tokugawa Ieyasu – three legendary samurai – and the emperor Meiji, until World War II bombing raids destroyed much of the city in 1945.

Since rebuilt, Nagoya today is once again one of Japan’s most important cities and its third largest. An industrial and manufacturing powerhouse, it is home to global companies such as Toyota and NGK, and boasts wide, urban streets overlooked by towering office blocks and skyscrapers, such as the impressive Twin Towers of Nagoya Station – the largest railway station, by building area, on earth.

Beppu, Japan
On the ‘Japanese Riviera’ – a gorgeous stretch along the northeast coast of Kyushu Island – lies Beppu, one of Asia’s most famous hot spring resorts. Sat between a beautiful, beach-laden bay and imposing volcanic mountains, Beppu is home to more than 2,000 onsen hot springs that bathe the city’s streets and fill the air with warm, volcanic steam. There are hundreds of baths to enjoy here, including hot water baths, mud baths, hot sand baths and steam baths, as well as spectacular springs for viewing only. The ‘Hells of Beppu’, which include the cobalt blue springs of Umi Jigoku (Sea Hell) and the blood-red Chi-no-ike Jigoku (Blood Hell), provide incredible views and simply unmissable photo opportunities.

Keelung, Taipei, Taiwan
Almost destroyed as a result of Allied bombers during the Second World War, Keelung has developed into a major port city in the Far East. With a number of historic sites and lovely coastlines to explore, you’ll be hard pushed to fit them all in. The Ershawan Gun Emplacement was chosen to be a military base during the Ching dynasty, and is now a very peaceful place. There are many beautiful old temples and old forts to discover, and as it is a coastal town, you will also find ocean parks and copious amounts of seafood to sample.

Hong Kong, China
At first sight, Hong Kong is a hectic mix of bright lights, towering skyscrapers and crowded streets. This bustling city is renowned for its incredible skyline where, at night, the skyscrapers attempt to out-do each other with their incredible light shows.

However, upon closer inspection, Hong Kong offers so much more as a cruise holiday destination, with a plethora of shopping malls, restaurants serving delicious local cuisine and incredible traditional architecture to admire. Perhaps take a tram ride to Victoria Peak for a magnificent perspective over this “Fragrant Harbour”. 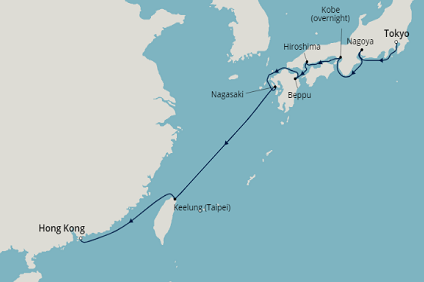 Itinerary may vary by sailing date and itineraries may be changed at the cruise line's discretion. Please check itinerary details at time of booking and before booking other travel services such as airline tickets.